So, thanks to MLB.com, I’ve seen the article about the Mets equipment truck that is headed down to Florida. I learned that “even the happiest of thoughts and the presence of Mr. Met couldn’t ease the pain of carrying equipment with numb hands and trying to talk with frozen faces.”

Then I read that the Tigers spring training equipment’s relocation to Lakeland is “actually a two-day, two-truck event.” And that “more than once, winter weather on the way down has delayed the truck by a day or two.”

Thank God MLB has been keeping us up to date on this process, but where, might I ask, is our article about the Braves spring training truck? Surely it’s being loaded somewhere, and probably it’s a little chilly? Certainly crew members are grumbling about the six hour drive, and just where the hell is Mark Bowman?! Not getting their quotes, that’s for damn sure. Could it be that there is something going on with our spring training equipment that the organization doesn’t want us to know about?

Just like Arod’s shocking decision not to comment on his contract’s opt-out clause at his recent children’s book signing, this silence on the matter of our spring training truck is disturbing, and hey, a little insulting. We’re tired of all the speculation and endless rumors, Braves, we want the facts. Take a lesson from the Mets, who understand that their fans NEED TO KNOW where the team’s batting practice balls and Gatorade coolers are AT ALL TIMES. And get the hell on it, Bowman.

In the meantime, we get articles about Hampton and Thor from the AJC. The Hampton one is about two sentences long (revealingly?) and is relatively information free, but the Thor one is interesting, as I’ve never before heard that he’s had problems with freaking out on umps in the past. He seemed calm last season, but almost eerily calm, now that I think about it. So, hmm. But I’m a Thor fan, and willing to give him a little bit of time to grow into first base (and happy to have Wilson just in case), and I also quite enjoyed this glamor shot of Thor that accompanied the article: 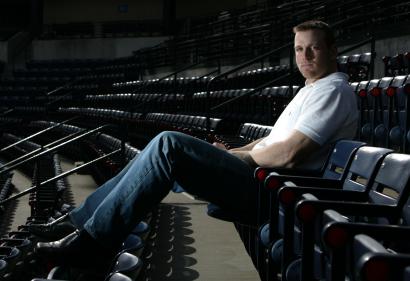 He kind of reminds me of Rainier “McBain” Wolfcastle from the Simpsons: