Not much to say about that road trip except “wow, it sucked.” I mean, sucked like I didn’t even think we were capable of sucking. Not yet, not when I was just getting used to the idea of actually staying on pace with the Mets this season. I really wanted to go into this series at home on a high note, but I guess we’re just going to have to turn things around starting tomorrow.

–Smoltzy looked great, despite the pinky. That little collision with Kearns could have gone so much worse.

–Frenchy went through a little stupid spell in Washington, but he remembered whatever he learned from his Heap Tapes in Boston, and looked so smart up there. Unfortunately, as Mac suggests over at Braves Journal, Andruw seems to somehow have gotten ahold of Frenchy’s old brain. Didn’t Bobby tell Frenchy not to leave that thing lying around? Doesn’t he know Andruw’s at that age when he gets into everything?! But speaking of smart, how brilliant was Salty pinch hitting, looking at eleven pitches before walking in a run (after he missed a grand slam by about ten feet)? We really, really need another starter, but I want to keep him. Could we get a starter for Thor? I’ve always liked him, but he’s pretty much dead to me after grounding into that double play yesterday — at least for a week or so.

–I haven’t seen them all stupid-happy like they were during that monsoon win on Saturday night in awhile. The Former House Mates in particular: did anyone else notice the shot of Frenchy giving Kelly a pep talk before he went out there to try for a single to complete the cycle? And Heap pulling Kelly out of the high-five lineup to hug him just killed me. Classic Those Two — Frenchy being all, “EVEN IF YOU HIT IT TO THE WALL, STOP AT FIRST, OK?!?” and then Heap with the sympathetic encouragement when he couldn’t do it. Winning is always good, but they’re also so much funnier when they’re winning.

Though Heap can be pretty funny when we’re losing, too. Check out the latest pupil in the Chipper Jones School of Stink Eye: 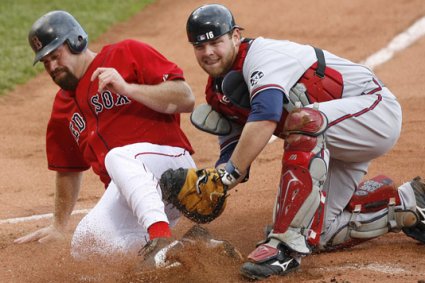 Here he is all thrilled that he’s tagged out Youks at home, biting his tongue and trying not to grin. But then: 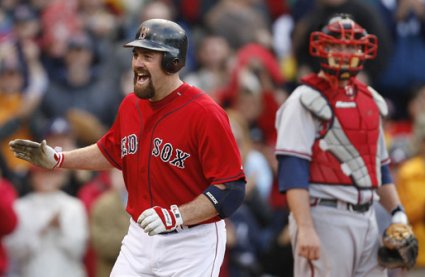 Youks hits a cheap, foul-ish homer, and BOY has Heap got the stink eye working. Nice. Chipper would be proud.

We’re up against our old friend Jorge Sosa tomorrow night. I wish I could be at the game to boo the living hell out of him. One of my greatest memories of last year was Bobby putting Sosa in late when we had a significant lead, and Sosa immediately giving up a walk. Before the batter had even made it down to first, Bobby stormed out to the mound (and we all know that Bobby isn’t normally very quick on his feet) to flagrantly chew Sosa out (this was well into the long season of bullpen mediocrity, plenty of it from Sosa himself), and poor Rent had to stand there and translate. The best part was Heap standing in the middle of all of this and looking terrified, his eyes bouncing back and forth between Sosa, Bobby and Rent like one of those cat clocks.

But anyway, we’d better absolutely annihilate Sosa tomorrow. I wonder if he and Rent still have their matching purses?