So, I just spent the past fifteen minutes checking up on Braves news and pictures, and I was laughing almost the entire time. But in a good way!

More running/another shot of Hampton hanging out on the periphery. Somehow he even seems to be running in a different direction than the others – sideways? 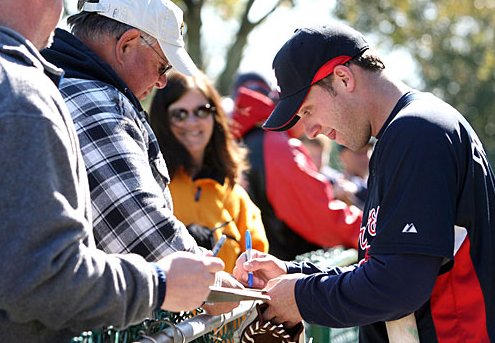 Frenchy has arrived, and of course is in high demand with the autograph hounds. 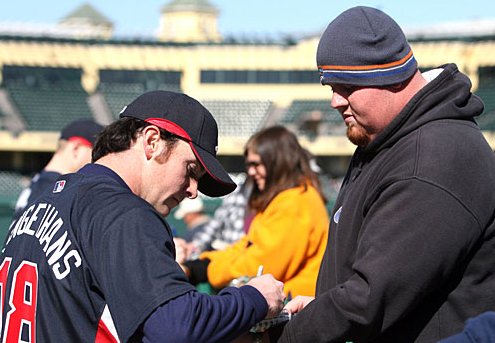 Langerhans gets one dude, who looks kind of pissed off about the whole thing. 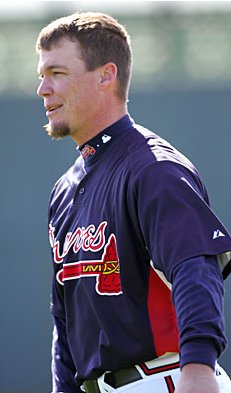 Chipper, my God. I thought you had the mid-life crisis under control? To borrow a line from MST3K: “Chipper’s beard to Earth!: I hate you, and am cutting myself off from all humanity!” 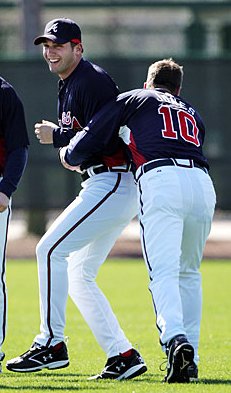 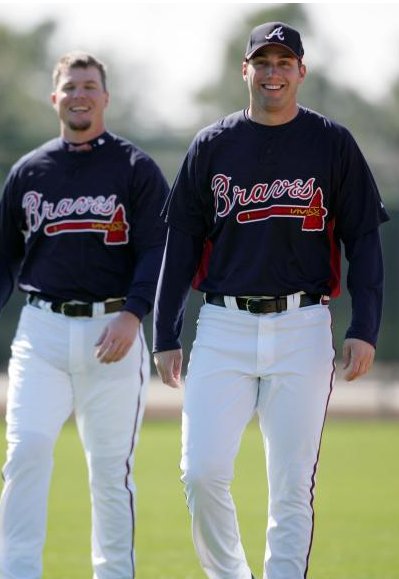 Aging Stud hangs out with Future Stud Who Looks the Part But Otherwise Is Still Working On It. 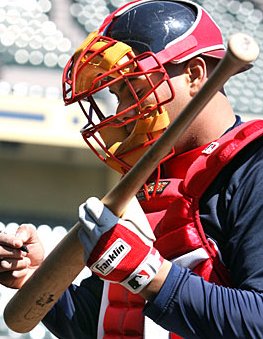 Pena leaves his mask on while signing; you never know when a fan might foul something into your face. 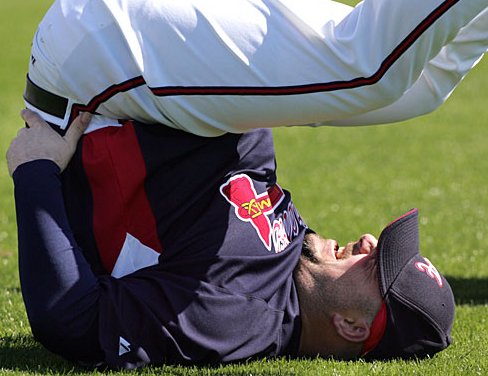 Wicky engages in some very disturbing stretching. It’s kind of sad that I’m fifteen years younger and a hundred and fifty pounds lighter and still probably couldn’t pull this one off. Good job, Wicky. 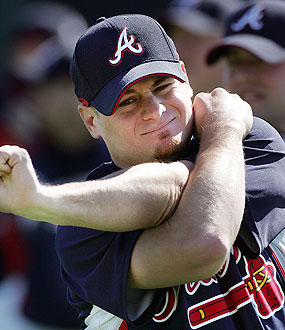 I doubt the cameras will catch Chuckie doing the ass-in-the-air stretch. Apparently he’s up to two hundred pounds since the offseason due to his lifting program, which is encouraging.

Yet another feature on Chuckie and his offseason career. At this point, he could make it into the Hall of Fame and his plaque would simply read: HE INSTALLED WINDOWS. This article is as delightful as anything where Chuckie is quoted necessarily is. He mentions that the Braves have “shower shoes,” which is hilarious to me, and talks about the atmosphere with his buddies at work, offering pretty much the greatest quote of all time:

“We screw around a lot,” he said. “If there’s pine cones, we’re smoking each other with ’em. I like it.”

The “I like it” at the end really makes it for me. Chuckie is the best.

There’s also the first attempt to get Smoltz to talk about his divorce, which he handles brilliantly. Last year he was a bit of a PR disaster, freaking out anytime someone printed an unflattering article about him – and sometimes having his loyal catcher freak out on his behalf (I know I won’t soon forget Heap’s indignant “When he pitches a good game does that mean he’s too YOUNG?!”), but he was obviously under a lot of stress last year, and sounds very collected and professional now.

We also have some goofball thing about pitchers and catchers from Mark Bradley, which I found insulting to catchers even though he’s trying to defend them, but I guess he’s joking. It doesn’t occur to him to mention once that catchers have to learn the way each pitcher works so they can carefully evaluate every hitter and situation based the pitcher they’re working with? Eh. I should probably just avoid the “fun” AJC blogs.

Finally, I adore Chipper’s attitude in this article from the official site. You fuckin tell ’em, Chip. Just shave first, or no one will take you seriously.

The above Braves Notes also mention that someone hit our golden youth Matt Harrison in his pitching arm with a batted ball. He’s okay, but – what do you want to bet it was Orr?