The AJC revealed last night that Frenchy turned down the original salary the Braves offered him, and was then bitch-slapped with an even smaller salary in return. It seems strange to me that a player with less than two years of service would think that he could negotiate for more money when the team could easily just give him the league minimum and tell him to shut up, but maybe it happens more than I’d realized? The whole thing is bizarre, but I’m not sure if it warrants much attention.

Is Frenchy really stirring up some salary melodrama, or is the AJC just having another “ANDRUW IS ON WAIVERS AND THE SKY IS FALLING” moment? Either way, I really enjoyed the picture they selected to accompany the story, which showed up on the front page of their website this morning: 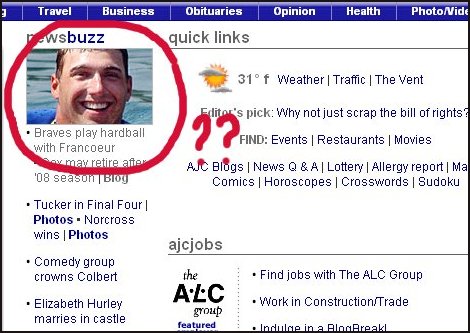 Dude — what? Where is he? Was there some sort of “Frenchy Frolics in the Ocean!” AJC photoshoot that I was not aware of? Or did someone just find his old vacation pictures lying around? And in what universe is this picture appropriate for this story? Were they going for the “How could you play hardball with this face!” angle?

There was a game against the Dodgers today, and we won 4-1. Nothing too exciting, though Pete mentioned that Skip will be down to call a few games this coming weekend, so I’m pretty excited about that. Speaking of the radio broadcasts, I hope they’re just waiting to premiere their new commercials for the 2007 season when the actual games begin. If I have to hear how to ask for a hotdog in Hindi one more time, people are gonna die.

Chuckie gave up a few hits in his first inning today, but I’m not too worried — I think it was the lack of Heap behind the plate that threw him off. Nothing against Pena, I just get the impression that Chuckie and Heap have a particularly symbiotic relationship as a battery.

This morning, a friend of mine let me know that the 2007 roster pictures are up on the website. A few highlights:

Most Likely to Pass for a Mugshot:
Ryan Langerhans

Too Cool to Wear His Uniform for his Roster Portrait:
Andruw Jones