We’re leaving for spring training bright and early tomorrow morning — any requests? I’m not sure what I mean by that, but probably pictures.

Speaking of pictures, check it: 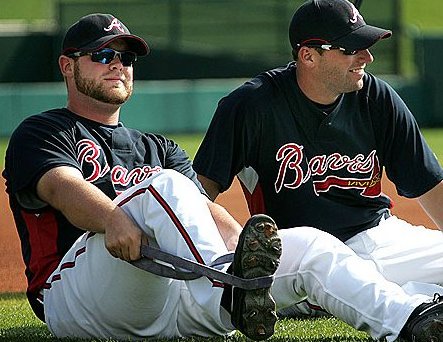 Heap never fails to find the ugliest sunglasses of all time and wear them with pride. I can’t wait to again witness this phenomenon in person.

The AJC pictures from spring training haven’t really captivated me so far, but this is an instant classic: 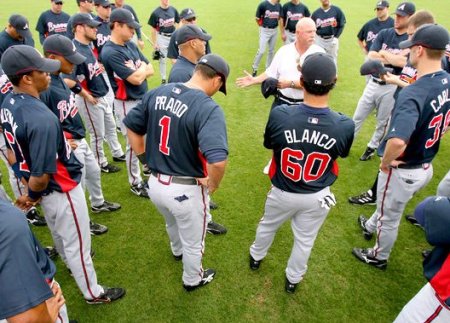 Porter is totally giving them the talk. An annual tradition, I’m sure. Note that none of the big stars were required to attend.

I hope Heap gets to enjoy all of his favorite activities today, such as playing ping pong with his cardboard cut out of Frenchy: 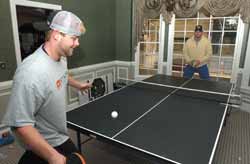 Turns out my everyday posting is likely not going to happen until April. I’m excited about going down to spring training, but I’m finding I don’t have a lot I want to say in these final pre-preseason days. Maybe I’m just rendered speechless by the continued good (as in, not catastrophic) news about Hampton.

New pictures from the AJC this afternoon: 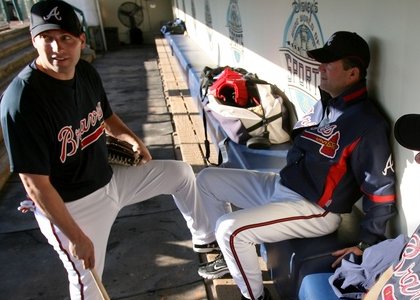 Frenchy has of course arrived early. 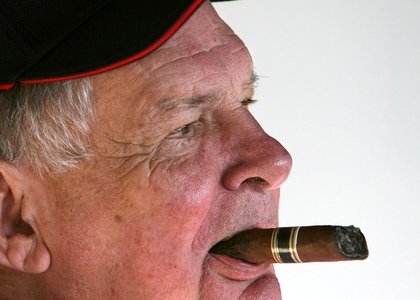 Bobby is doing his iconic poses with cigars, a spring training tradition. 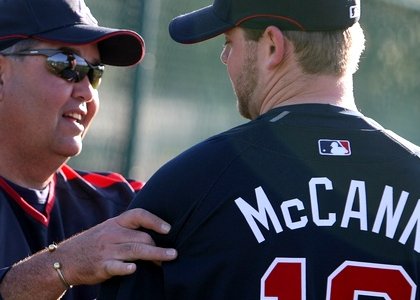 People are getting back into the habit of being grabby with Heap, after a long Heapless winter. 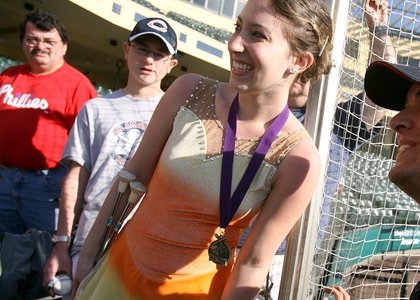 And Phillies fans are looking on in jealous disgust. 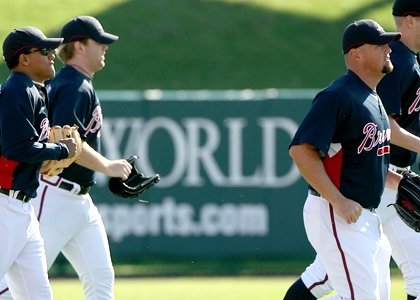 Did Yates gain a bunch of weight, or is that just an unflattering haircut?

Is anyone surprised that Matty arrived seven days early? One of my wishes for this season is that he finally gets the regular starting respect he deserves. Heap also showed up as soon as possible, not surprisingly. Sadly, he will be spending Valentine’s Day without his significant other. Maybe the Australians will take him out drinking.

And if anyone out there has been daydreaming about an intimate Valentine’s Day evening with John Rocker, here’s a little sneak peek into his plans. As former Braves go, he isn’t exactly the first one I’d approach for the Valentine’s Day article. Where’s the Lemmer when you need him?

Check out the latest Frenchy interview.

The staging is extremely uncomfortable. It seems like three guys just cornered him with a bunch of inane questions (give it a fucking rest with the SI cover already) as he was leaving the men’s room in a fancy hotel. He looks nervous/unhappy/annoyed.

Praying at college bowl games and being threatened into obedience by the likes of Truett Cathy — it’s pretty much exactly how I imagined Frenchy’s offseason life.

Don’t forget to shed a McFrenchy tear when he mentions the second person who called to congratulate him on signing with the Braves!

Last year I complained that we didn’t get a truck story.

Clearly this is a sign that I have become a real mover and shaker in the Braves blogging world. I’m sure Chipper will be showing up in my “chat room” to call me a douchebag any day now.

Not a lot going on right now, and I’m not really in the mood for talking about the trades or even the Former House Mates’ Offseason Adventures in Matrimony (though that day will come), so please enjoy this Hank Aaron feature, which is aggressively cute.

Also: can anyone explain to me the point of specifically rating players for the impact they’ll have on fantasy teams? If they’re playing well in reality, they’re going to be good for your fantasy team . . . so . . . any projections based on reality are . . . kinda the same thing, eh?

I was going to post last night, but then the superbowl pissed me off, so I got drunk and went to bed. And for the record, I of course hate Peyton more, and in fact mostly hate Eli just because he’s related to Peyton and looks like him.

Anyway — Daniel raised a good question this morning about the Braves’ new network for 2008, which is: what the hell is it? All I can come up with is this: a picture of Smoltz and the promise of Skip. I listen to Skip on the radio anyway, so I don’t really care who broadcasts on TV, but it is nice to have the video and audio actually sync up, so Skip is a good start for Peachtree TV. I am kind of wondering why they’ve got Joe working for them instead of Pete, but whatever. My guess is that TBS punking out was the last straw for Pete and TV, and he’ll just stick to radio now. So I suppose at some point this season I’ll have to choose between Pete on the radio and Skip on TV, which will be rough. Why split up two people who work so perfectly together? It’s like the McMansion all over again!

We’ll also have Sports South and FSN covering games, which are kind of the same channel, aren’t they? I’m not entirely sure how that works, but I know that Jerome Jurenovich is involved, so I’m against it.

I guess I should try to figure out if I even get Peachtree TV. Is it basic cable? The fact that they’ve done a shitty job of advertising it doesn’t really bode well for the actual content. Last time this year there was a lot of hubbub over the new Sports South model, which actually was pretty well done last year, Jerome aside. I hope OKT will be back, and the ridiculously frequent clubhouse interviews (I feel sorry for the guys, but fans like me do so love that bullshit), and of course the clips of Heap saying that he hates broccoli, though they will start to drive me insane sometime around May 1st, after they’ve been shown eight thousand times.

I will of course mourn the loss of the Sonic spots forever, unless some other sponsorship picks up the miked player bit.

It occurred to me last month that I’ve already been to more hockey games this season than the number of Braves games I went to last year. I’m a very casual hockey fan, I rarely watch on TV, and wouldn’t recognize anyone on the team (except for Lehtonen, cause of this, and Exelby, cause, that hair) if they walked up and slapped me. The hockey games are such a fun experience; if I could afford it I would buy season tickets in a heartbeat. The fact that the daiquiris they sell in Phillips Arena are asskickers while the ones at Turner Field are 99% ice and 1% food coloring notwithstanding, I really enjoy the experience of a live Thrashers game so much more than a live Braves game.

This is partly because Atlanta Spirit or whoever works on the Thrashers in-game programming does a good job, but mostly because the in-game programming at Turner Field sucks. Yes, they both show the same soul-crushingly unfunny blooper reel. I guess that is just unavoidable outside of Wrigley and Fenway. But I brought a couple of friends from out of town to a game at Turner Field last summer, and was actually embarrassed by all the ridiculous sound effects and other bullshit.

There are some in-game things I enjoy: I like “Thank God I’m a Country Boy,” because it’s just awful enough to be fun. Anything involving karaoke on the giant TV is usually amusing, and making the players participate was a stroke of genius last year (probably Frenchy’s idea, though. He wants to be a singer only slightly less than he wants to be Dale Murphy. And I don’t know if you’ve noticed, but he really wants to be Dale Murphy). I also like it when they play “Do Right” to taunt the opposing relief pitchers.

Everything else is obnoxious. Hot girls are always a fan favorite, but I’m so fucking sick of the t-shirt canon and that shitty musical accompaniment. The Braves need to take a cue from the Thrashers and have their hot girls perform important maintenance on the playing surface before the game. To hell with this t-shirt crap: the Thrashers give their girls in short skirts a list of tasks that all involve bending over. I mean, if you’re gonna employ hot girls, don’t fuck around. I don’t care if they start stripping during the seventh inning stretch, I don’t even mind if they do so while simultaneously shooting t-shirts into the crowd, but the current pre-game t-shirt throwing routine is uncomfortably lame, and has got to go.

Even worse are the video segments meant to get the crowd pumped. I understand the purpose of trying to get the crowd pumped; God knows Braves fans often need it. But I’m pretty sure whoever puts together these videos secretly hates the Braves. It may in fact be Mark Wohlers. Nothing pisses me off more than when we’re down by five in the ninth and they show some goddamn “HAY GUYS REMEMBER THIS ONE GAME WHEN THEY SCORED SIX RUNS IN THE NINTH” video. It’s called a jinx, for one thing, and shut the hell up, for another. The pre-game “entrance” video is depressing, too. I don’t know why this shit works for me at the Thrashers games (they have similar, less awful videos) and not with the Braves. Maybe I’m just overly sensitive about the seriousness of baseball. Maybe the Braves just need a new video editor.

In general, there is something special about going to Phillips that I’ve never really felt at Turner. Part of it is that the fans who actually show up for the Thrashers are into the game from start to finish. I hate to trash talk Braves fans, because there are those of us who aren’t more interested in eating our quesadillas than watching the game, but I’m beginning to accept that we’re in the minority. Even in the dugout level last year, there were people who made me wish I was just at home watching on TV without having to listen to a detailed description of their new dieting resolutions. I actually walked all the way to the back of the mostly empty 400 level to watch the last game I attended in 2007, and it was the best experience I had at the field all year, by far. Save of course for the roaming children who stampeded through briefly, bored with the game and pretending to be dinosaurs. I could do a whole post on how horribly behaved and disinterested most kids are at Braves games, but I guess there’s nothing the in-game entertainment crew can do about that, except be even more obnoxious in an attempt to entertain them.

Hopefully Turner will leave a better taste in my mouth this year. I have had great experiences with awesome crowds at Braves games, but I can’t rely on that to happen every time, or even often, like I can at Thrashers games.

Unrelated but necessary: the fact that Dave O’Brien thinks he deserves to have a Hunter Thompson tattoo kinda ruined my day.