Today is the one year anniversary of this blog, and it’s also the first day of voluntary “show up at Turner Field and dick around” day for the Braves. Well, that’s not true: the pitchers and catchers are there doing important work to prepare for spring training and the 2008 season. Frenchy, on the other hand, just showed up because he heard the AJC would be taking pictures.

But hey, that’s why I love Frenchy. I’m excited about the new season, and it’s fun just to think about the guys working out at the field while Roger furiously takes notes in his little diary. There are so many preseason issues to discuss, I don’t know where to start. All I can think at the moment is: 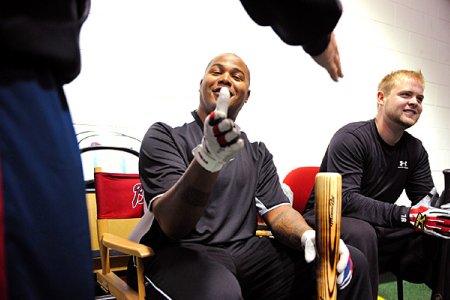 I’ll be posting every day from here on out, and I have a lot I want to talk about before spring training starts. But to commemorate this blog’s first full year in operation, I think just posting the first Frenchy ‘n Heap picture of the season is appropriate. (That’s Frenchy’s butt on the left.) Perhaps the first picture of These Two can be looked upon to determine the quality of the season ahead. If so: Frenchy’s butt, Heap with dorky hair. I’m not exactly sure, but I think that means we’ll get the Wild Card and lose the NLCS to the Reds. BRING IT ON.

Saw this headline on AJC.com’s front page, and assumed the Hampton in question was an obscure folk singer, or maybe a particular haircut that was popular in the seventies: 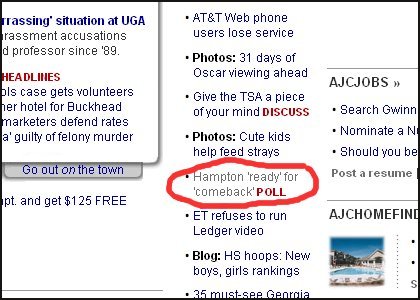 I do appreciate the fact that they put “ready” and “comeback” in quotes, as if to mock the suggestion, though I think they should take that tactic one step further:

Maybe “for” should be in quotes, too. Personally, I’m more interested in the cute kids who are helping feed strays.

I can’t even believe I have a Hampton tag. When and why did I create that?

I wasn’t really paying attention to the Santana hoopla, assuming the Yankees would get him and generally not giving a shit about the American League, but apparently the Yankees Jr. have struck a “tentative deal.”

So they’re spending wildly to get one of the best pitchers in baseball and we’re bringing home old guys who we’re nostalgic about. Neat.

I don’t even have the energy for a Glavine disclaimer. But here’s one anyway: I know many love him and are optimistic. I hope to join you in that happy place soon.

Remember when I said I was worried about Frenchy’s dog?

Well, apparently the dog is seeing a pet therapist once a week.

I’m tempted to think that someone has got to be joking or making this up, but no one is funny or creative or DARK enough to invent this stuff about the dogs. I should probably make a tag for “the Dogs,” because I think someone should be properly chronicling this.

I would recommend the song that I used as my title here, but I’m not feeling quite ~*Dave O’Brien*~ enough for that.

Congratulations to one of my favorite Braves, Matt Diaz, for this.

Braves Journal has it exactly right, as usual.

The fact that Diaz hasn’t been starting in left everyday since mid-2006 is pretty much everything that frustrates me about the Braves.

In other words: Bobby Cox’s love for people like Ryan Langerhans. Fuck!

What is going on with Frenchy and the AJC? Is he calling them every day and begging to be covered? Yesterday they posted a belated feature on his November honeymoon, and today we get this delightful peek into the world that is Frenchy:

I love the Harry Potter response on both ends. And the Superbad one, too (Mrs. Frenchy tries to save Frenchy’s dewy reputation: too late!).

I am worried about Frenchy’s dog, though: 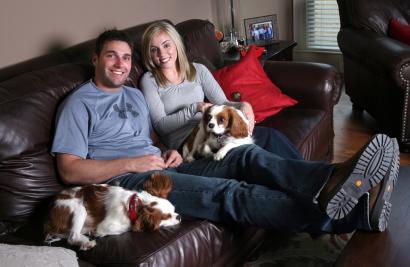 Particularly in the metaphorical sense.

Meanwhile, Heap is doing yoga. Which may or may not be a cry for help.

From an article about Frenchy’s honeymoon on the AJC:

“And how did Georgia businesses score with the nuptials? Their first night was spent at the Westin Peachtree Plaza, and the couple used Lee Patterson Photography and Lee Epting Catering, with flowers from Kim McKinney of Daffodilâ€™s Design Studio in Monroe.”

Bwhahaha — my husband and I stayed at that hotel on our wedding night in 2006, on the 61st floor. I bet we had the same room. Except not, because ours was a run of the mill guest room and Frenchy is theoretically a multimillionaire, but hey.

Let me take you through my day:

Actually, I’ll begin with last night. My husband I split a bottle of wine with dinner, so we went to bed pretty early. At some point during the night, my cell phone rang on the nightstand. It was my Braves Girlfriend who keeps me apprised of news. Too exhausted to have a proper conversation, I let it ring out and figured I would find out what had happened in the morning. Stupidly, I was excited at the prospect of news.

My phone rang two more times during the night, and I also received a text message. I figured at least one of those rings HAD to be the associate at my firm who wanted me to come in today, calling to say that his wife, who is expected to deliver their fifth child on Thursday, had gone into labor early, and therefore I would not have to come into work on goddamn Sunday. I spent the rest of the night happily anticipating listening to the voicemail he’d surely left, informing me of such.

Well, I got up in the morning and had two voicemail messages. The first was from Lauren. As soon as she said “guess who we just traded for Kot–” I whispered “Devy” in terror. Devy! Our first round draft pick, winner of the 2007 Southeastern Something or Other Award for Excellent Pitchmanship! And for what? The outfielder version of Mike Hampton, most notable only for having an especially hot wife! Which also makes him the outfielder version of Kris Benson! Which is also not good!

The second message was a guy sleepily saying “hello?” as if I had called him. And the text message said “who is this?” So I think, somehow, using my subconscious telekinetic sleepwalking powers, I called Devy in preemptive sorrow in the middle of the night. Cause there is no other explanation for that.

Oh, and I totally had to work today. Fuck!

Anyway, good for Devy escaping The Organization That Hates Him. Is there any way he could have been more mishandled? We threw him to the wolves in 2005, and after he heroically recovered from post-traumatic stress syndrome in 2006, we jerked him around shamefully in 2007. As much as I sometimes get annoyed with Billy Beane (which is more Michael Lewis’ obnoxiously worshipful book’s fault than Beane’s himself), I’m really glad Devy is headed out to O-Town if we can’t keep him (and I was never delusional enough to think that the Braves wouldn’t get rid of Devy, I was just hoping for at least a few months of watching him pitch in the majors — alas). Hopefully he and Huston Street (his new BFF, without a doubt) will kick ass together in the 8th and 9th.

So, to quote the Concrete Blonde song, “Joey,” which is entirely fitting for 2005 Devy if nothing else:

Oh, and Kotsay sucks. I’m starting to think this season is going to be “interesting,” folks.

Speaking of this season, this blog is still on hiatus, but I’ll be back to posting every day starting February 1st, and I’m going down to spring training from February 28th-March 2nd with my new camera, so I’ll have the inside scoop on who is going to which crappy Disney bars, etc.

By the way . . . people who were disappointed with FanFest: this is not the way to go at all! Huge fan conventions advertised on billboards are a waste of time! Go to the charity events. Yes, they are expensive, but let me tell you a little secret about rich people and the charity events they frequent: many of them feature OPEN BARS. And not only are you drinking at the open bar, the players who were forced to come are partaking as well. Can you put a price on leaning at the bar while Heap orders another Crown & Seven and complains to his agent about how long he has to stay? And don’t even get me started on what goes on in the women’s restroom at these things. You’re welcome in advance.

From the Bowman Chronicles, of course. Circa March ’07:

Still, Francoeur showed absolutely no sense of jealousy or animosity when he came through the clubhouse doors at Disney’s Wide World of Sports Complex on Thursday morning. All seemed normal. As usual, the 23-year-old right fielder was wearing a bright smile and walking alongside McCann.

I miss baseball a lot, and this officially sanctioned fangirling, too. When do we hear about Frenchy’s contract??

And how about Pratt on the Mitchell Report?! I laughed out loud, guiltily.

So Andruw ended up in L.A. (and we thought he wrecked havoc here in little old Buckhead . . . just wait!), Cormier was released, and the Braves are building a section behind home plate for the Scrooge McDucks of Atlanta baseball fandom. It’s always nice to have some news in the offseason, and to find out where players will end up for the year, but most is pretty lame. I just can’t get into it without Skip’s commentary and Bulova commercials.

HOWEVER, please see this incredibly exciting Heap n’ Frenchy video, (scroll to 1:40) which features the two of them taking in a Hawks game, of all things. Aficionados will note that Heap is wearing The Shirt. I love that Frenchy’s reaction to significant action during a game is the same as mine: stand up, remain standing up for an inappropriate amount of time, then stare at everyone who is sitting down in shock/disappointment. Many thanks to Leah for the link.