You knew it was coming. Didn’t you??? Goddammit.

Somebody needs to stay in his hotel room and watch Conan O’Brien when he’s up in Philadelphia. Cause some of those ladies at the bar are Phillies fans, my man. This plan of action may also be useful in New York. Your groin — and your fans! — will thank you.

I keep catching myself thinking that we lost last night. Somehow it felt like we did.

I have this thing about inanimate objects, probably from watching The Brave Little Toaster too many times as a kid. I believe they should be treated with a certain degree of respect. I don’t like it when people smash guitars, and I hate that scene in Office Space when they beat up the copier. So as I’m reading through this article about Andruw’s continued struggles, I’m feeling a little sorry for him, but also relieved we don’t have to deal with it anymore, and then I come to this quote:

And that kinda crushed me. What the hell happened to him, anyway?

In happier ex-Brave news, here’s a cheerful article about Devy doing well in the A’s bullpen, and making friends with fellow Braves alum Alan Embree. He recently got a win after pitching a scoreless tenth. I hope he’ll pitch in this upcoming series with Oakland. Having Kotsay on the team has been surprisingly helpful, and I’m actually glad to see Devy doing well with another team. It came to the point where I didn’t trust this one with him.

And speaking of this team. Last night. Psssh. Many thanks to Lauren for recording one of the few worthwhile moments, as I was in the car when this happened, and would have been heartbroken forever if I didn’t get to see the Dugout Reconciliation of ’08.

There are few things that make me as happy as Frenchy running:

Especially when he’s tracking down a ball in right, oh man. Lauren, that idea for a blog called OMG FRENCHY!!! with just one of these pictures posted per day was actually really brilliant, but, in a way, maybe this blog is already that blog. On a good day.

That story last night about LaRoche wanting to meet Wyatt Earp is the reason I will always listen to the radio, even it’s lagging a full inning behind the television broadcast. Well played, Mr. Van Wieren.

In shocking news: I agree with Dave O’Brien! I love Frenchy and look forward to seeing him play, but enough is enough, Bobby. He can sit once in awhile. Though actually, now may not be the time. I think Lauren’s picture vividly captures the look I’ve been noticing on him a lot this season. I don’t know if this amounts to “bench him” or “don’t even look at him the wrong way,” but regardless, I’m going to take a wild guess that he’ll play every game this season as long as he’s at least semi-physically able.

I had to watch Matty save the day on Gametracker at work, and I could see Turner Field from my office building. I spent a few minutes staring at it longingly in the eighth. At least I have these marvelous AP pictures: 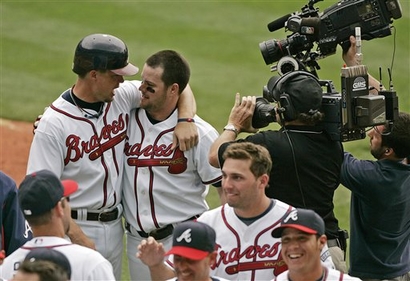 All this physical affection seems to be doing them good.

Meanwhile, we’re down two more pitchers. Onward to Pittsburgh! I fully expect to see Omar Infante pitch in relief at some point.

Man, did Sports South make a big deal about Frenchy kissing Kotsay on Sunday! How many times did they replay it? I counted at least three. I was waiting for a slow motion replay with commentary about his technique.

Personally, I found nothing especially hilarious about it. It’s pretty much in line with what we know about Frenchy already, and in terms of weird, intriguing things that Frenchy has done in the dugout, it ranks below some of the looks I’ve seen on his face this season in terms of significance. I guess it is a sign that perhaps he is coming out what has looked like a deep depression? Or a sign that he’s lost his mind entirely. Hmm.

I did enjoy the fact that, after the second replay, they cut back to the dugout at present, where Frenchy was sitting next to Heap, who was furiously biting his nails. Now that’s comedy.

In other news, I thought Skip was being a little mean to Chip on the radio last night, and I happened upon Chip being interviewed on 94.9 this morning on the way to work . . . someone called in and said the same thing! Chip did not deny it.

From an AJC article about Gonzo’s impending return:

Gonzalez ate dinner at Smokey Bones barbecue every night in early April so he could catch Braves games on satellite.

Every NIGHT? Isn’t he like . . . a millionaire? I suspect even the guys making the league minimum could afford satellite TV, yes? Maybe he’s in love with one of the waitresses. Chipper might want to warn him about that.

Oh man. Talk of Smoltz returning to the bullpen. I laughed when it was Barry Zito; perhaps this is karma coming back to haunt me.

I don’t know what to say about this season so far. I thought we would at least have one of those excitingly awful years. You know what I mean? Where you’re so low that it just starts to get hilarious? But there’s a zombie quality to this team right now that prevents even that. Also, they occasionally win games and get my hopes up. Maybe kicking some ass would turn things around: 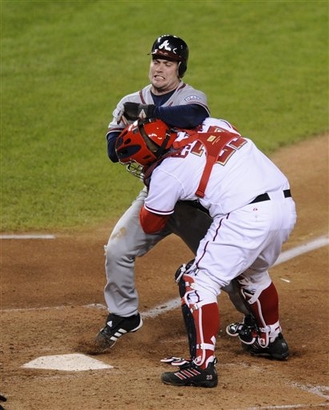 I mean kicking ass the old fashioned way, since we can’t seem to do it the baseball way: grab someone’s head and pop ’em in the face! Matty has the right idea here. I still say a long overdue inaugural Baby Braves brawl would solve all our problems.

And one more thing: 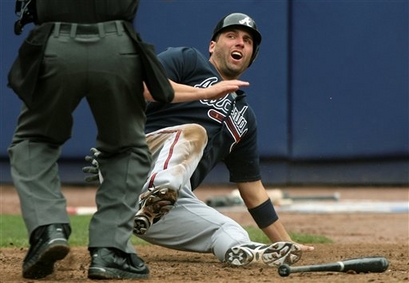 I haven’t posted in a week because I don’t know what to say. I was fairly certain that things would eventually go badly this year, but things went so immediately and overwhelmingly badly that jokes ain’t coming easy. But I found this lovely anecdote about Devy, who has been called up to the A’s, and thought I’d post it, to lift my own spirits if not anyone else’s.

Looks like he’s still getting dicked around by travel circumstances and prevailing — God bless you, Devy. If our bullpen is shit all year (which, yeah, not a stretch!), I will accept it as the curse of the albatross that we killed which was you. If that makes sense.

Also uplifting: Heap taking off his pants in the dugout. Disturbing, too, but still a sign of life.

This is the first good news this team has had in awhile.

Get them the hell out of Colorado! On second thought, I won’t feel good about this until the plane has landed safely in Washington D.C.