Andruw has arrived at camp, amid lots of questions and speculation about what he’ll do next season. I’m sure it’s on his nerves, and it’s damn well started to get on mine. It’s unlikely that he knows what he’s going to do at this point, and even if he did, he’s not going to talk about it. Not now, not after the All-Star break, probably not until the offseason.

I’m much more interested in talk of his weight loss, personally. Apparently he gained an extra twenty pounds in Japan because the guys ate KFC and McDonald’s every day while they were over there for their All-Star game. Geez, he could have at least tried Kobe steak or some shrimp tempura. But anyway, the story is that he bet his wife he could lose weight faster than her, and she won because he was “partying.” Nicole Jones is my favorite Braves wife by far, and I appreciate her scheme to get Andruw at least relatively back in shape. Smoltz claims Andruw looks like he did in 2005, a career year for him, so hopefully he’ll give us a season to remember him by, just in case he does leave. 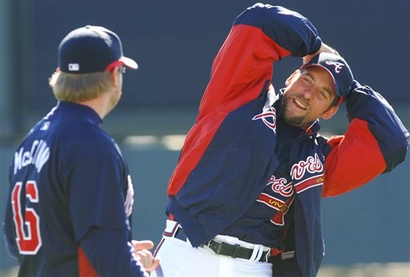 No matter what’s going on in your personal life, proximity to Heap will put you in a good mood.

Glen Hubbard totally wishes he was the white Julio Franco. 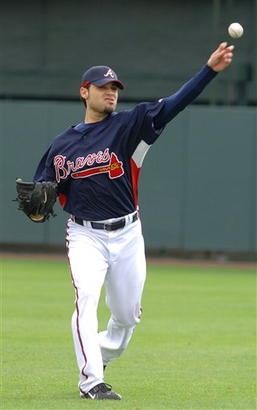 Most pitchers look kind of geeky when they’re throwing, but Gonzalez looks cool. I’m waiting to actually see him in action before I start to call him Gonzo, cause otherwise it seems a little inauthentic, but it’s hard to resist. 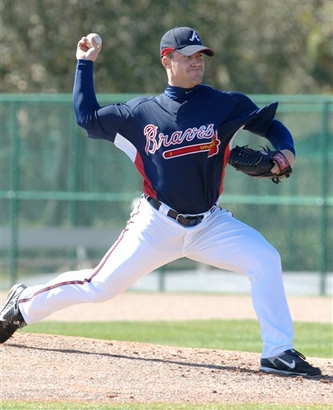 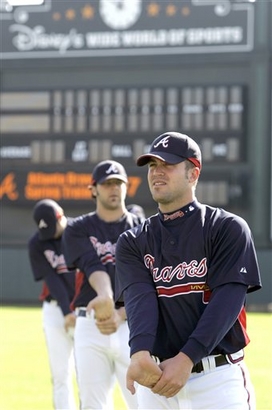 Ah, there he is looking like the hot guy with emotional problems who we all know and love. The look on Lerew’s face back there is pretty great – I’ve heard Farnsworth caliber things about him, should be interesting when he comes up! 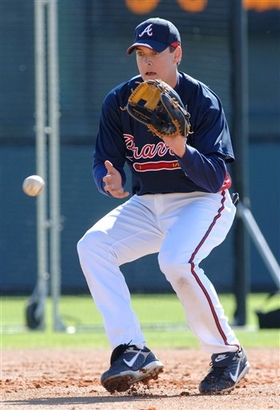 Oh, Christ. Why does every picture of Kelly trying to field look like this? I mean I’ve only seen two so far, but this isn’t encouraging. 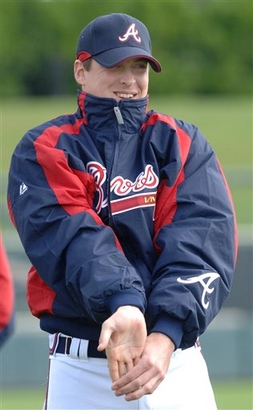 I’m trying to be open minded about the idea of him starting at second, I really am. 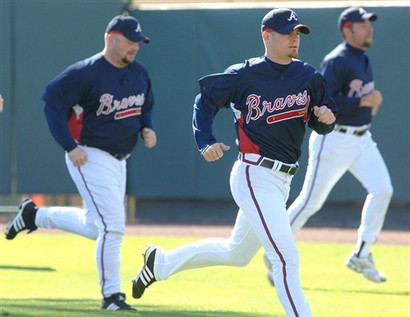 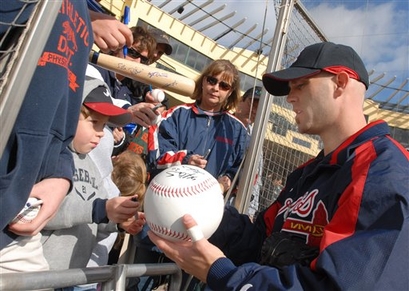 Huddy looks kind of worried about that giant ball. I think that’s what all baseballs felt like to him last season . . . 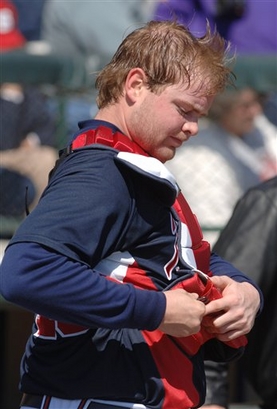 So Heap’s hair is obviously the greatest thing in the world, pretty much always, but especially when he’s just taken off his batting helmet. Someone please invent a baldness cure, quick! 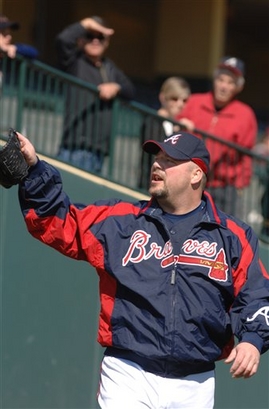 Wicky talking to someone in the stands. He is pretty awesome with fans; I saw him parking lot signing about two days after he arrived in Atlanta when nobody even knew who he was yet. 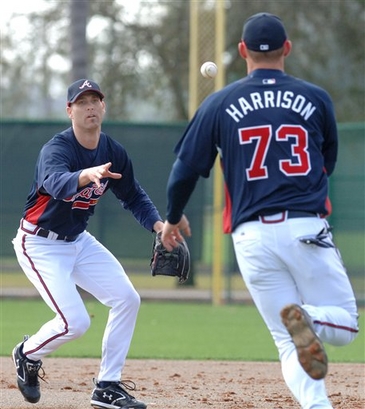 Huddy practices with one of the kiddies. 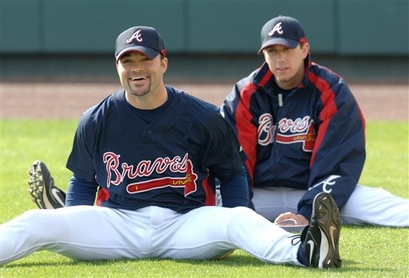 Cormier looks like he wants to replace Gilly as Hampton’s buddy. 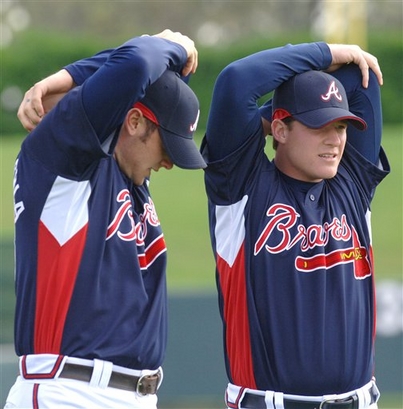 Salty has gained about a thousand pounds since the last time he was photographed. Probably not a great sign. The other guy is Clint Sammons, another minor league catcher. 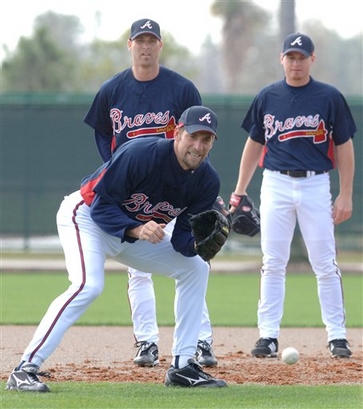 Chuckie looks little even compared to Huddy, but I still think he’d be the most valuable fighter in a bench clearing brawl. 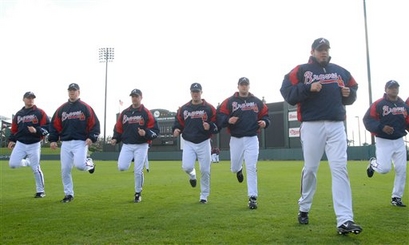 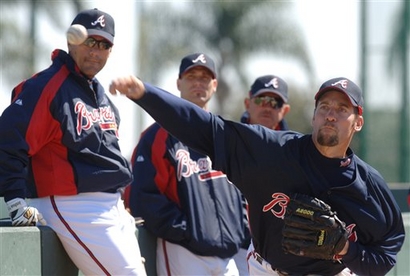 So, when I first saw this picture I seriously thought that was Leo hanging over Smoltz’s shoulder there. I’m not a “LEO WOULD SOLVE ALL OUR PROBLEMS!” nut, but I did get kind of excited for nostalgic reasons. It’s actually a coach named Joe Breeden, possibly pretending to be Leo to raise morale. 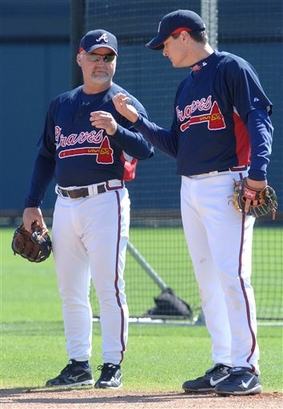 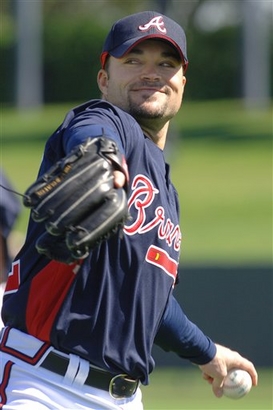 Hampton has such a sweet, innocent smile. 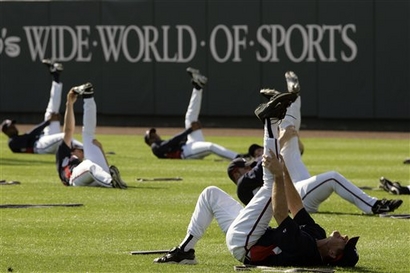 I always get ridiculously excited when I see the Braves doing stretches that I do before I work out. 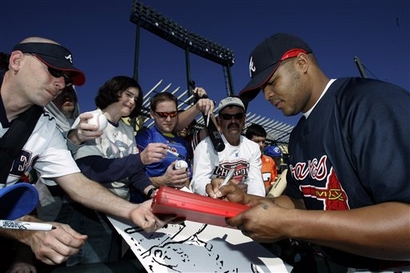 Andruw has shown up, and he’s looking pretty hot, I must say. 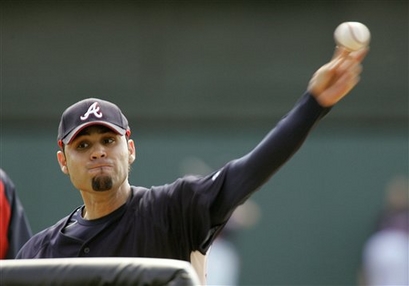 Gonzalez knows how to work a goatee: take notes, Chipper. 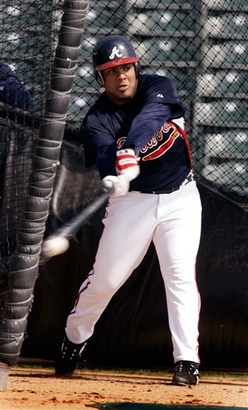 I’m not loving your form there, Pena, please see Pendleton. Or better yet, see Heap’s dad. 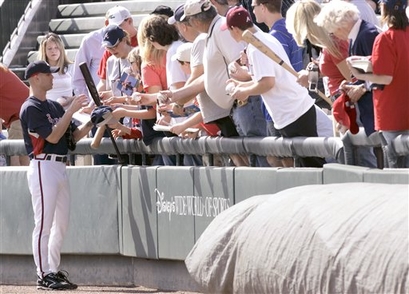 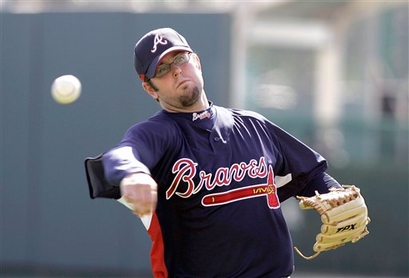 While most pitchers have a “constipated” look during their delivery, Moylan’s is more “bored.” 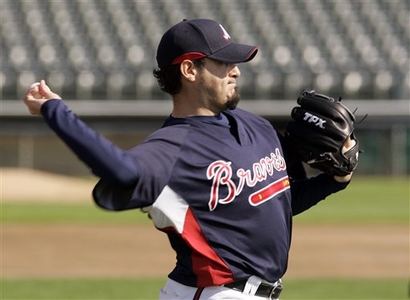 The Vulch is back in action. I have high hopes for him this year; he really seemed to come a long way last season and he’s definitely not an “overthinking” pitcher, which I like. 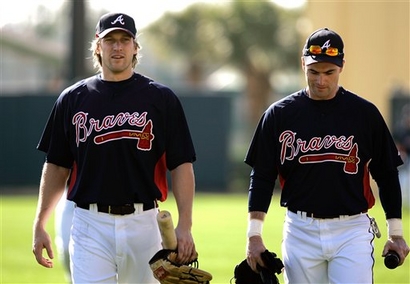 T.J. Bohn seems to be competing in the longest mullet competition along with Wilson, Langerhans and Heap. 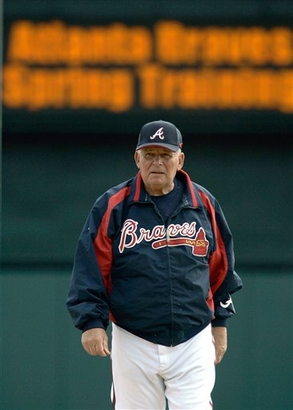 I’ll leave you all with a majestic shot of Bobby wandering around alone.